When answering the question “How does a sump pump work?” we need talk about the sump pump switch. The most common problem with these switches is that the float gets blocked preventing the pump from turning on. The independent vertical float switch manufactured by Glentronics has two small floats in a protective cage. The cage protects against blockage and the two floats provide back up against failure.

This particular switch is also equipped with a control box and an alarm. Being independent from the pump allows you to adjust the float level without moving the pump. 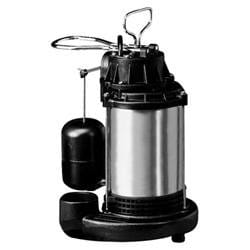 The same concept as the independent vertical float except the switch is an integral part of the sump pump. The black bar you see mounted on the side of the is a pressure sensor. As the water rises the pressure increases and turns on the pump.

The main draw back to these switches is they are hard to test without adding water. All of the other sump pump switches listed above can be manually activated without water.