For a basement that is wet and prone to flooding and leaking or seeping,  installing an interior basement waterproofing system is a must.

An interior basement waterproofing system is typically comprised of a vapor barrier and/or sump pump drainage system and dehumidifier if needed.

Basements that are continuously damp, flooding and/or leaky pose many different types of health hazards. Install the right system!

If you find your basement is in need of interior waterproofing, it is important that the system that you have installed is a closed channel system.  Many installers will install an “open system” that may pump a bit of water but will leave more moisture and humidity behind; and also leave behind the possibility of escaping soil gasses such as radon.

Another danger to having an open system in your basement is that children or pets could be injured if playing near the system.  The bucket pump image shown is an example of an open channel system.

Having an open channel basement waterproofing system can actually increase the health hazards in your basement and negatively impact the quality of air in your home.

It is said that over 40% of all the air in a home actually comes up from the basement.  This is due to what is called a stack effect.

Air will always come up from your basement into your upper living areas.  The stack effect varies with the seasons because the air itself will be heavier or lighter depending on the cold or warm temperatures.  The only thing you that can control in terms of air flow, the stack effect and basement air flow is the quality of the air that comes into the home.

Our basement waterproofing systems will not only keep your basement dry and free from flooding, but they will also give you peace of mind that the air your family breathes is as clean and safe as can be.  Our systems are covered and keep soil gasses from escaping, mold and mildew from building up and humidity from forming.  Bonus, our interior basement waterproofing systems also keep little ones and pets safe.  Learn more:

Stack effect is the movement of air into and out of buildings, chimneys, flue gas stacks, or other containers, and is driven by buoyancy. Buoyancy occurs due to a difference in indoor-to-outdoor air density resulting from temperature and moisture differences. The result is either a positive or negative buoyancy force. 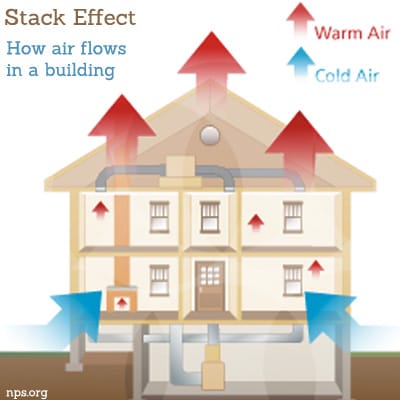 The greater the temperature/thermal difference and the height of the structure, the greater the buoyancy force, and thus the stack effect. The stack effect is also referred to as the “chimney effect”, and it helps drive natural ventilation, infiltration and fires.